SYOGOC from the outset wanted to ensure that they had adequately referenced best practice from previous Olympic Games, and at the same time customized the approach of Operational Planning for the inaugural Youth Games in Singapore. Meng Keh stated “Amadeus successfully concluded services on Beijing 2008 Olympic Games, and were able to bring such practises in operational readiness at the appropriate stages of planning. We were more than satisfied with Amadeus providing the necessary services throughout 2008 and 2009, and this was culminated in the workshops we jointly facilitated in Dec, 2009.” The workshops included tabletop exercises for venue specific, function specific and overall games management on incident planning, command and communication. It very much supported the C2 planning and integration with overall MOC (Main Operations Centre) functions.

Eric Tan Huck Gim, Chief Operating Officer“ The tremendous amount of expertise and advice accumulated from Amadeus members vast experience with Games Command and Control has complemented our capabilities in a vital way. We thank for all the good work by Amadeus during the planning and readiness phases in lead up to the event. “

About SYOG Singapore hosted the inaugural Youth Olympic Games from 14 to 26 August 2010. The Singapore 2010 Youth Olympic Games received some 5,000 athletes and officials from 204 National Olympic Committees (NOCs), along with 1,750 media representatives, 20,000 local and international volunteers, and 320,000 spectators. Young athletes - aged between 14 and 18 years – competed in 26 sports and took part in a http://ccctb.com/ Culture and Education Programme. The Singapore 2010 Youth Olympic Games inspired youth around the world to embrace, embody and express the Olympic values of Excellence, Friendship and Respect. It created a lasting sport, cultural and educational legacy for Singapore and youth from around the world, in addition to enhancing and elevating the sporting culture locally and regionally. 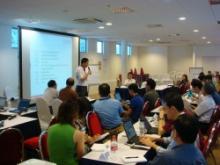