Closer to our dreams

On July 4, 2011 the IOC Executive Board announced the sports shortlisted for the 2020 Olympic Games. The announcement was made ahead of the 123rd IOC session in Durban, South Africa.

The sports included are: baseball, karate, roller sports, softball, sports climbing, squash, wakeboard and wushu, one of which could be added to the 2020 summer sports program.

Baseball and softball were dropped after 2008 and are looking for reinstatement, while karate, roller sports and squash are not new to the shortlist. Only sport climbing, Wushu and wakeboard are for the first time being considered for the Olympic Program

IFSC President Marco Maria Scolaris welcomed the decision as a step forward in the development of the sport and in the pursuit of the vision that always guided the efforts of the IFSC, which has from the outset set forth a vision for sport climbing to be an Olympic sport.

The questionnaires, sent at the end of April 2011, were evaluated on the basis of the athletes' profiles in gender, number and demographic spread, the participation and contribution from the Youth, the measures undertaken for Anti Doping, the Sustainability and Legacy of the sport and the Media development.

The final decision on the inclusion of one of the shortlisted sports in the 2020 Olympiad will be taken during the 125th IOC Session in Buenos Aires in 2013. "Another hard route has been climbed, and a new starting point has been set" - commented President Scolaris, who announced the formation of a committee specially dedicated to the tasks connected to the Olympic Bid, and thus named IFSC Olympic Dream 2020 Bid Team.

"With the support of the whole IFSC EB - says Scolaris - I asked Li Zixhin (Representative for the Asian Council) and Keith Ferguson (Representative for the Pan American Council) to help me in this fantastic adventure. While we are all excited, I also want to thank the IOC Program Commission and the IOC Executive Board for this amazing recognition to our athletes and to the sport."

The comments by IOC President Jacques Rogge on the inclusion of slope-style events in skiing and snowboarding in 2014 may sound as a good omen for sport climbing: "It is growing very fast - said Rogge. You have young, dedicated, spectacular athletes..." which may as well apply to our sport. 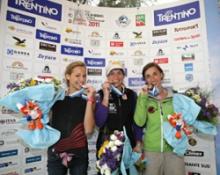